What The Hack 2.0: PaperChat, Wi-Fi Catcher and other hacks - XB Software

What The Hack 2.0: PaperChat, Wi-Fi Catcher and other hacks

What The Hack 2.0, the 44-hour hackathon, took place on 27-29 March, 2015 in Minsk, Belarus. The main goal for the hackathon members was to create something that would amaze everyone. And, according to organizers’ (XB Software and Imaguru) words, unlike other hackathons, this one was primarily created for developers to gather together, share knowledge and ideas, find out something new, become acquainted with someone new. In a few words, to have a good time with people who share your interests and hobbies.

In this particular case, 2.0 is not just a serial number. This year’s hackathon was definitely a new and improved version of the last year’s one. Judge for yourself:

So let’s continue with the most interesting part of the hackathon. The hacks! 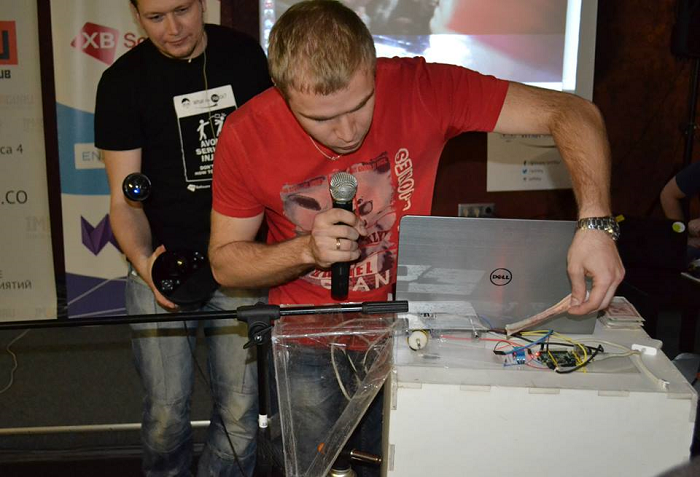 This nomination winner is Motivator T1000. It was created to motivate you in the most successful way. Plexiglas body, wires, tiny electrical engines, tons of sticky tape and a flaming heart made from Raspberry Pi . How can it help you with motivation? It’s simple. Motivator reacts to specific words (wanna stop to swear?) or to specific locations according to your smartphone coordinates (wanna stop to skip classes or work?) and then it terminates your money. Literally. By burning them! By design, it was supposed to be some kind of incinerator connected to T1000, but safety is primary and creators decided to make a little demonstration with throwing out money through the created system instead of the fire show.

The Best Female Beauty-Smart-hack. Layout? I’ll Think About It Tomorrow 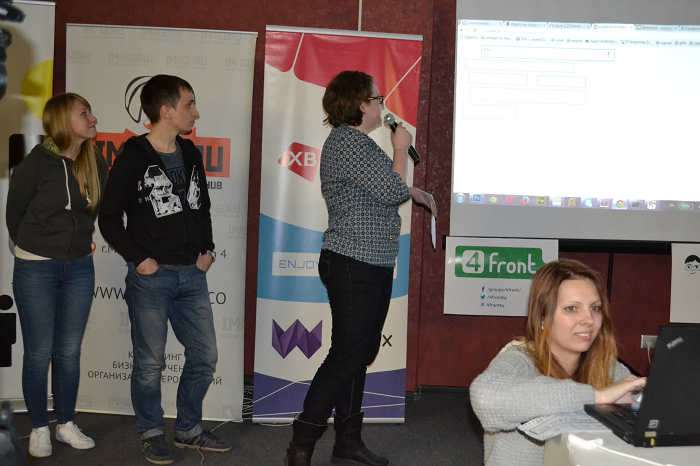 This hack was created to simplify the layout creation process. It is called Verstation. This is how it works in a few words: draw a sketch of your future website, give it to Verstation, get your website layout. As simple as that. All the empty frames will become <div> elements, fully painted over ones will become buttons. Paint them for approximately 30-50% and you’ll get <h1> elements, etc.

How can you use it? Imagine that a customer gives you a piece of paper with a clumsy sketch of a website he wants you to create for him. Instead of throwing it to a trash can, give this sketch to Verstation. Maybe, it’s not so bad.

The Most Useless Piece of Code. Big Brother Will Be Delighted

This nomination winner is MoodTracker. It was build with Kivy and its main task is mood tracking. 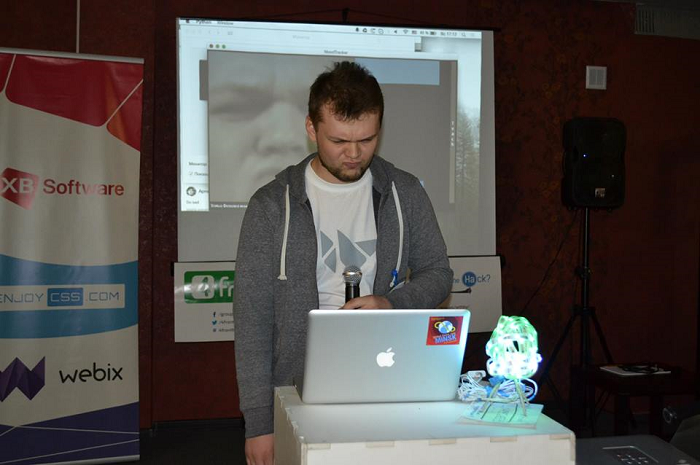 And this is not just an application. It’s an API in addition! Developers also made a Chrome extension. Why? To give Google a possibility to track your mood and become a better internet advertising seller, maybe.

MoodTracker source code is available on GitHub (which was, by the way, one of the WTH sponsors this year).

How else you can use it? Combine it with stereomood!

The Most Tangled Hack. Lunch Break is not a Reason to Break with Hangouts

This hack is called HangNonStopOut. The main idea is to give you an ability to use Hangouts even while you’re eating. 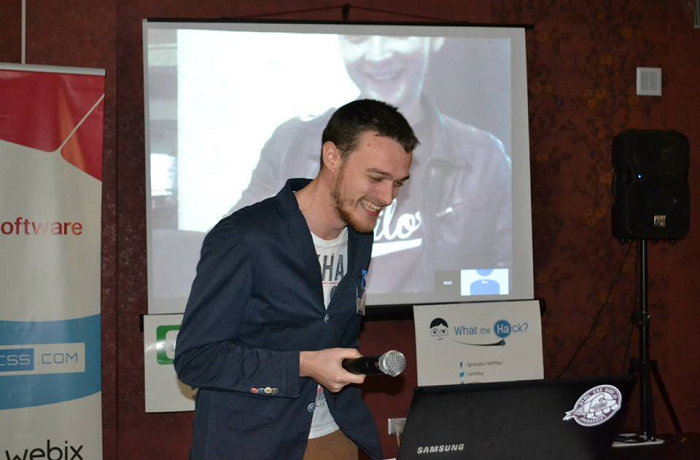 It was made in the form of Hangouts widget, which can connect a certain gesture with a specific phrase. The application recognizes the gesture and then “pronounces” the matching word sequence to your Hangouts buddy (this is where the Yandex SpeechKit magic starts).

You can also get the source code from GitHub.

The app will be useful if you still want to talk, but your tongue is tired already. Or it can be helpful for somebody who communicates with the world through the finger language, for example.

The Most Technological Hack. Using Waves Instead of Buttons

And the most science-intensive hack as well, considering that developers used the Doppler effect as the main concept. 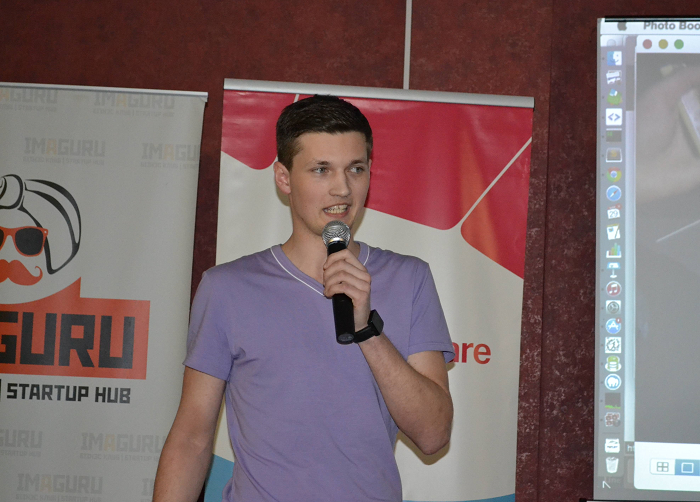 This one is called The Invisible Joystick. It uses the noise reduction system to recognize the waving of the hand to the left or to the right and clicking (you can use your Zippo lighter to make it look cooler).

These three events can be used for almost anything you want. Page scrolling, for example. Or you can create your own Kinect.

And now! The third place!

Meet UNREALtimeMESSENGER. The main idea is to use the webchat in any way you want to. You can type your message and this messenger will pronounce it to your friend on the other side. It can help you communicate with people if you have some pronunciation problems. Are you too lazy to type? Not a problem! Here’s the voice recognition for you. There is also the possibility of translating messages, so the language barrier is not a problem anymore.

And these are not all the functions available with this messenger. You’re free to try it. Here’s the GitHub link.

As a prize from the Yandex company, the developers got highly technological and eco-friendly charges for almost anything that works on electricity. 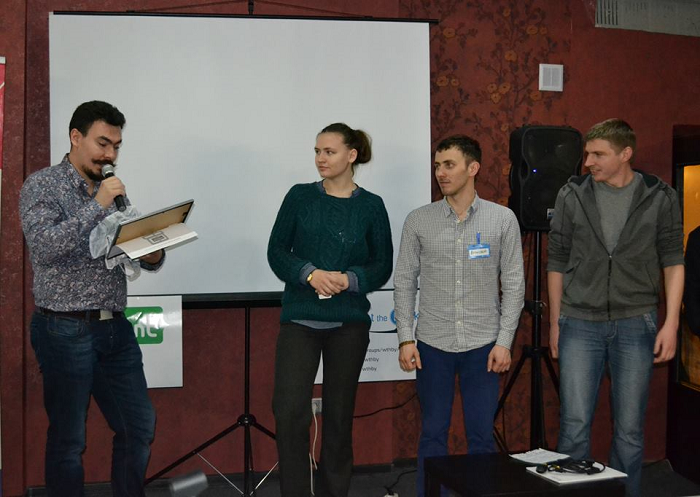 Second place winner. Hardware hack this time. We shot it at the stage of design. What can it be? Any suggestions? 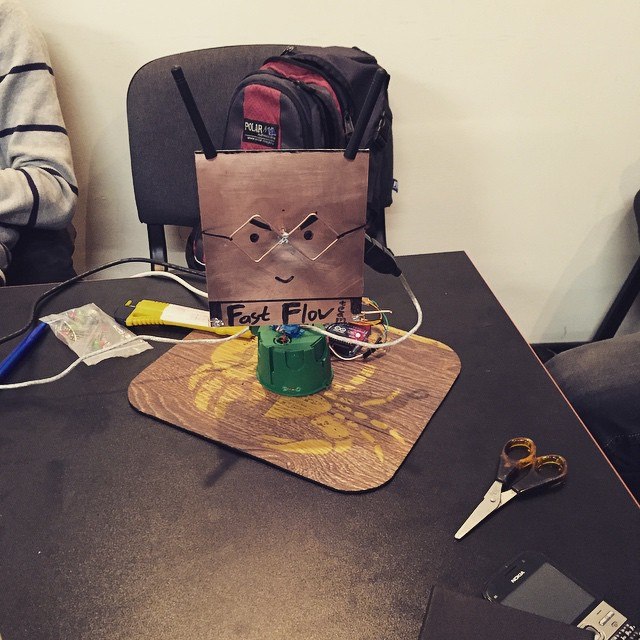 Nope, this is not an almost-human-like-robot-destroyer. This is Wi-Fi Catcher. 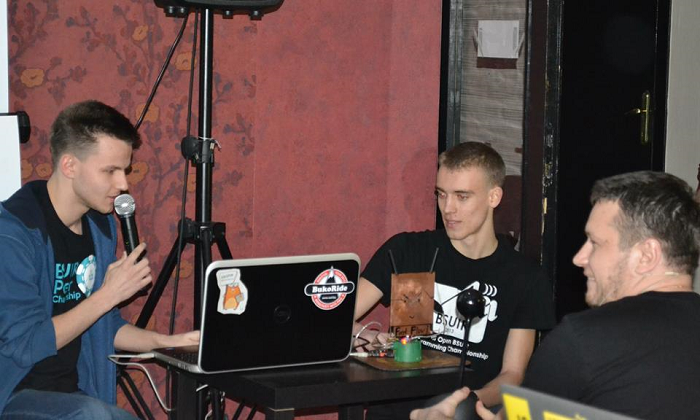 Basically, this Catcher is an antenna which scans the space around, creates a database of available Wi-Fi hotspots, selects the passwordless ones and then connects to the fastest one of them.

This is what developers got as a prize for their work. It’s a drone: 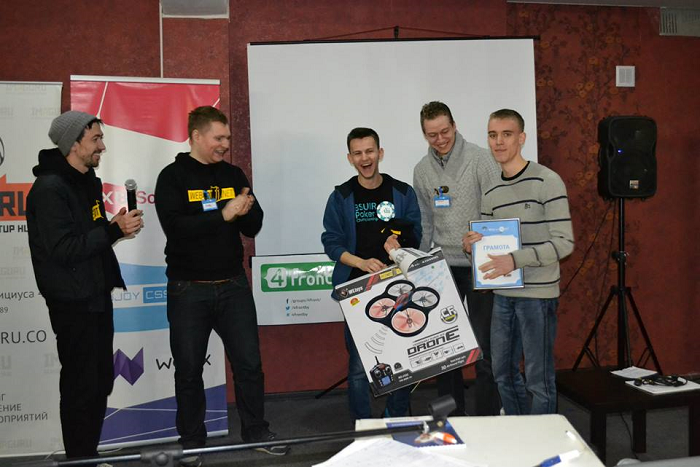 And here’s an idea for the next year’s hack: they can combine Wi-Fi Catcher with this drone and turn it to the Flying Wi-Fi Catcher. 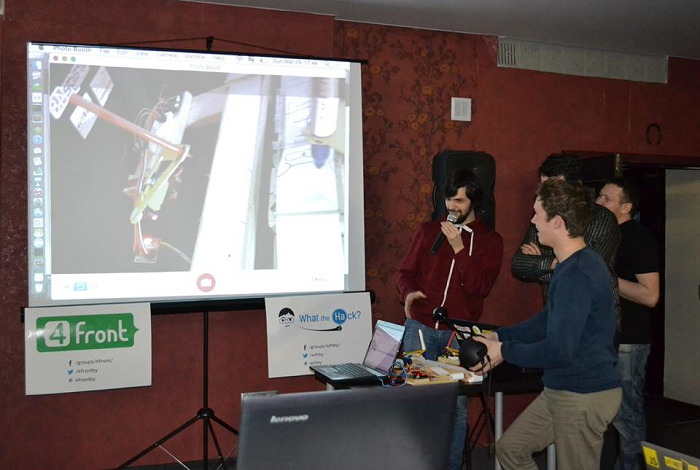 Paperwork. What can be worse. Take a paper, write something on it, take another one, repeat. Why can’t I use my keyboard for that? Well, now you can.

And the first prize goes to… PaperChatSystem. Applause!

PaperChat will make all your paperwork for you. It’s a pen that is held by a manipulator managed by a controller that is controlled by your computer. And all this stuff together works as a chat. A paper chat. Looks retrofuturistic a little bit.

The main prize is Lego Mindstorms: 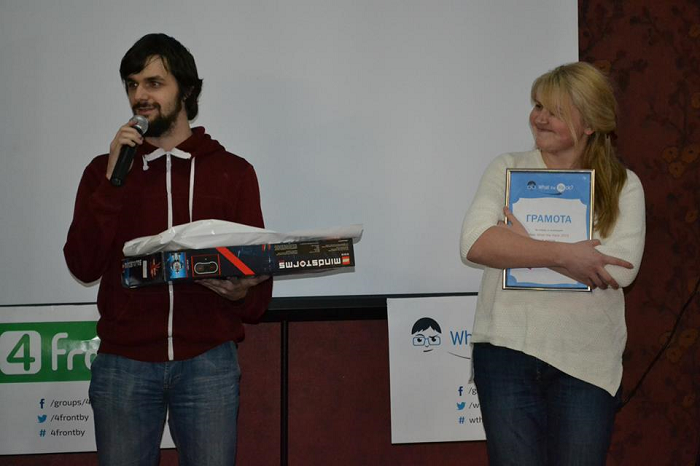 What a good chance to improve this awesome hack. Maybe, a robot will write messages next year. We’ll see.

Well, guess, that’s all we wanted to tell you about the WTH 2.0 main nominations. There were much more interesting projects created within those 44 hours, but this article will be too long if we tell you about all of them. It’s better to see once. And for everyone who wants to be a part of this spectacular event, here’s some good news: the next hackathon will be held this autumn. And organizers will be glad to see every single one of their guests. Well, almost.

See also WTH 2.0 video that captured the atmosphere of What The Hack 2.0:

The rest of hacks presented on WTH 2.0 will be described in another blog post. Stay tuned!