What The Hack 3.0. Belorussian Hackathon with FUN-tastic Hacks.

What The Hack 3.0: Pancake Printer, Neural Network as a Screenwriter, and Other FUN-tastic Hacks

24-26 November 2017, What The Hack 3.0 (WTH) hackathon was held at the IMAGURU business club in Minsk. The main objective of this event is gathering together the most creative developers to help them share the craziest ideas with the audience. All teams had 44 hours to get and share new knowledge and skills, meet creative people, make new friends, and create something that will blow the mind of the jury. As it was mentioned by the organizers of the event (XB Software, IMAGURU, FUNCUBATOR).

All these tasks were brilliantly accomplished:

Well, let’s take a look at the most bright moments of this year’s WTH?

The Most Useless Piece of Code. Yet Another Hello_World 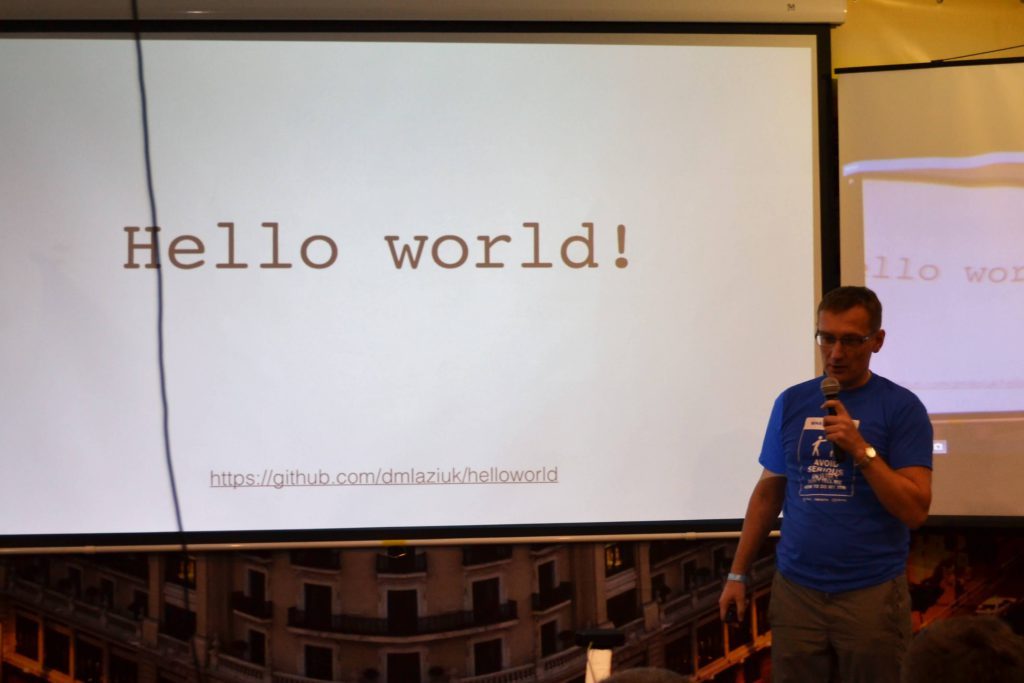 Want to inform the world about your unbelievable development skills, but the only available way of expressing thoughts is source code? Have no fear, the Hello_World team has a solution for such issue. From now on, reaching the heads of top IT companies will be as simple as writing the “Hello, world!” program.

When was the last time you visited a recruiting website? This morning? Yesterday? If so, it won’t be a surprise if we tell you that the amount of skills required for getting a job in a high-level development company amazes sometimes. But you’re not a lazy one, aren’t you? So, to get the goal, you start learning new skills. As you know, there’s no better way to check the efficiency of the recently learned programming language than writing the “Hello, world!” program. If you can do that, you can do everything, that’s for sure.

So, after you successfully beat the learning curve, this app is exactly what you’ll need. It can create an email that will be sent to the inventors of the most popular programming languages on GitHub. After you inform them that you can write “Hello, world!” in all actual programming languages, all you have to do is to wait until one of the bright minds of the IT industry will invite you to his team.

Can’t wait to use such a bright opportunity? The app is available on this GitHub page.

The Hack From the Most Beautiful Girl. GitHub as the Graveyard of Ideas 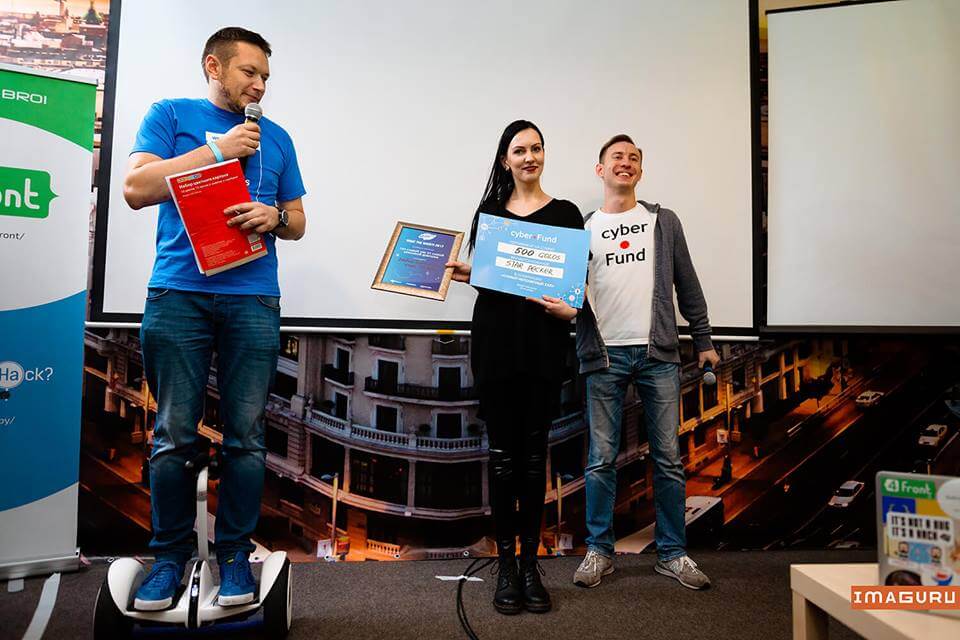 The Señor Spherical Star Pecker team has developed the application that visualizes the history and the current state of a particular GitHub repository. You can say that GitHub already provides its users with all necessary stats. But there’s always room for hack or two that can bring some life to habitual things. Or some death…

Using this app, you can visualize the life cycle of the chosen repository from the first commit to the last. The application uses such metrics as long code lines, nesting level, confusing function arguments, etc. It displays a map, each square of which is a particular file. If such file contains long code lines, an icon that reflects this issue will appear in the corresponding square.

Using such approach you can assess the state of the repository. In case the developer abandoned his project and there weren’t any commits lately, the icon of the tombstone will appear on the screen. Thus, you’ll always know if you’re dealing with a blooming garden or a graveyard of bright ideas.

The Most Spectacular Hack. The Boob Controller 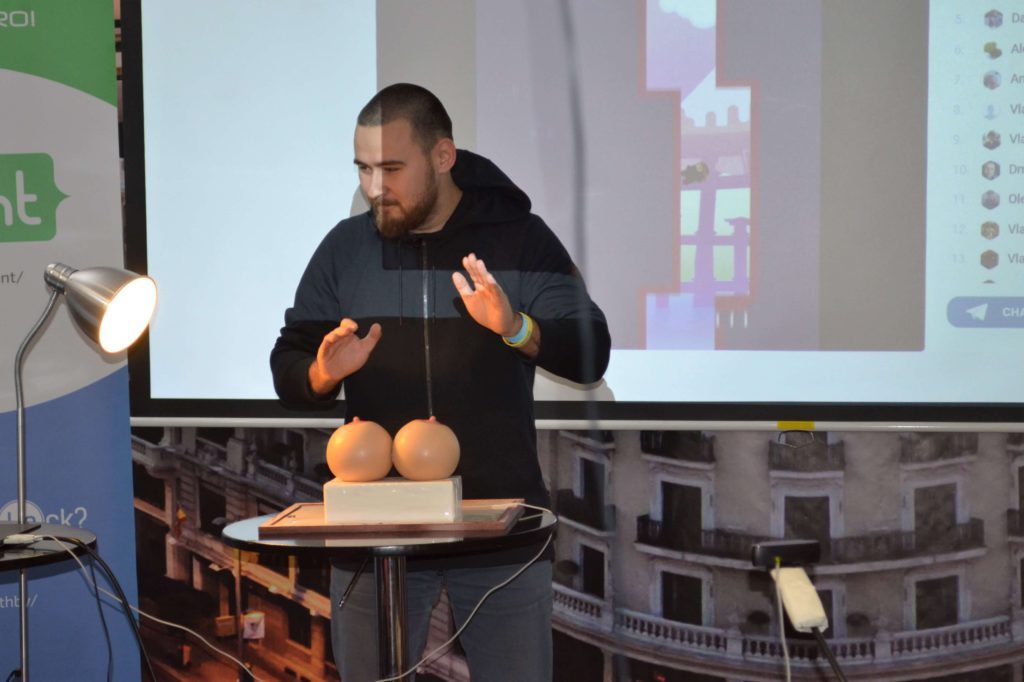 Nope, this device doesn’t allow you to control boobs. It’s a game controller that looks like boobs, which is also cool. Right?

The team named Would Buy a Bitcoin spent 44 hours on rethinking the way of how we play video games.Team members have created the innovative controller that can be plugged into your device and provide new gaming experience. Now, there’s one more reason to revisit good old games such as Super Mario or Gravity Ninja.

The Most Inexplicable Hack. Have You Missed Our Hackathon? Simulate it! 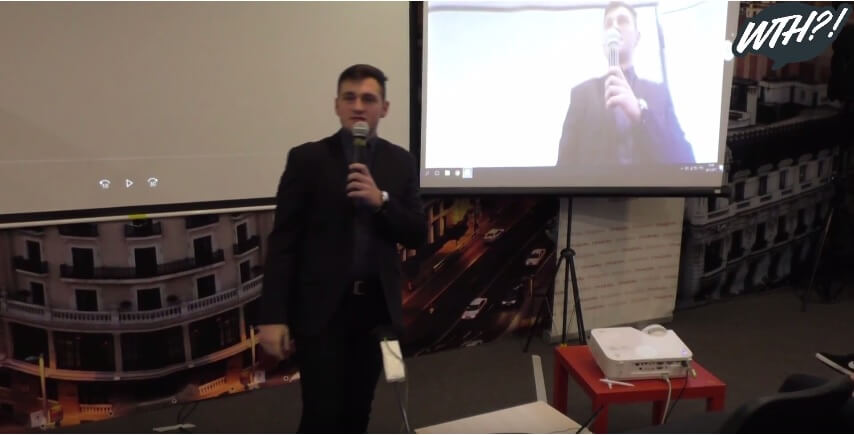 The team named Pinanie Studio has developed a web application that can simulate any event of your choice. To demonstrate its functionality, the WTH 3.0 hackathon was simulated in front of the astonished audience.

The app allows to voice particular set of phrases and, according to the idea of developers, it should help you to feel the atmosphere of a particular event. Unfortunately, like many other breakthrough ideas, this app didn’t reach the level of recognition it deserves. Thus, meet the nominee in the category The Most Inexplicable Hack. 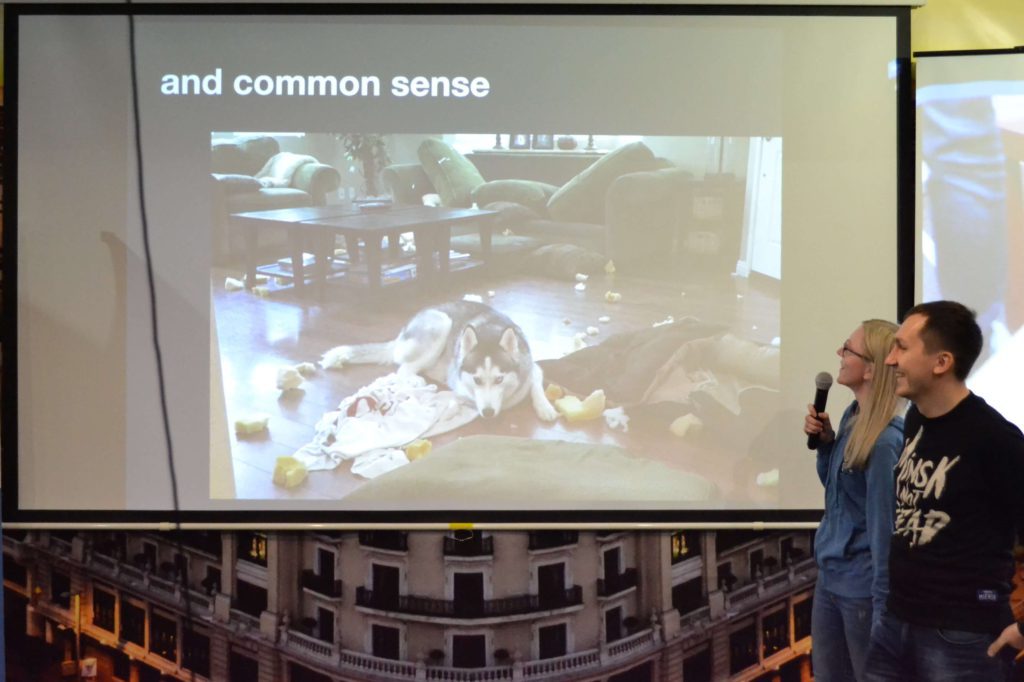 We all love pets, don’t we? But there are always troubles with them. Mess, mud, some chewed slippers here and there. It would be so much better if we could avoid such state of affairs somehow. Probably, that’s what The Compote team was thinking during the work on the project. Theу have created the Arduino based robotic spider and called him Robot Spider Pet. Like any other spider, it has six legs, and you can use the remote controller to make him crawl.

Besides that, the Hackerspace.by team was also nominated in this category. 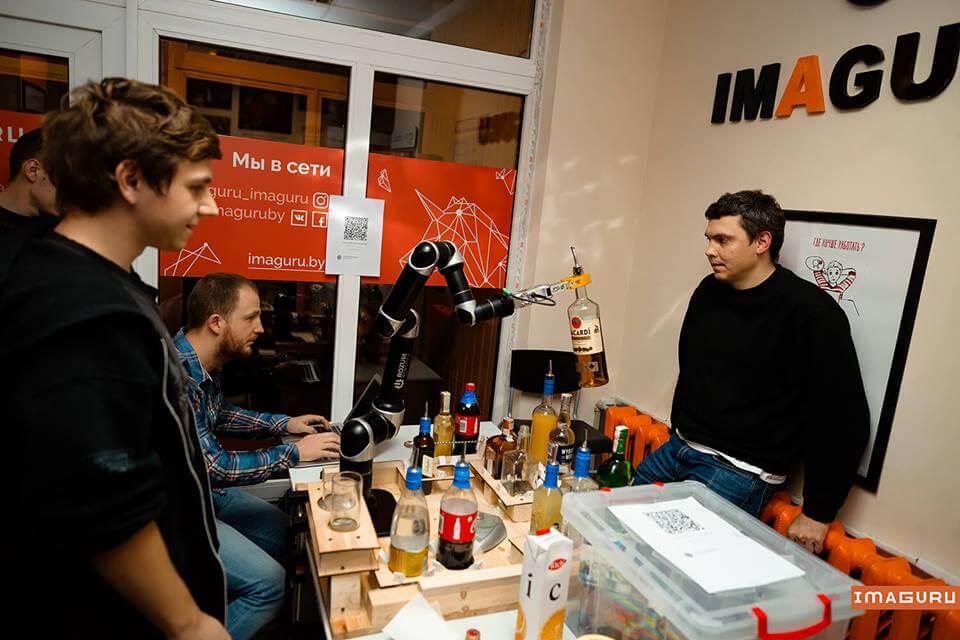 Their project is the robotic bartender named Sudo. He knows dozens of recipes and can mix you a cocktail or two after a hard day in the office.

The Most “Explosive” AI Hack. Neural Network as a Screenwriter 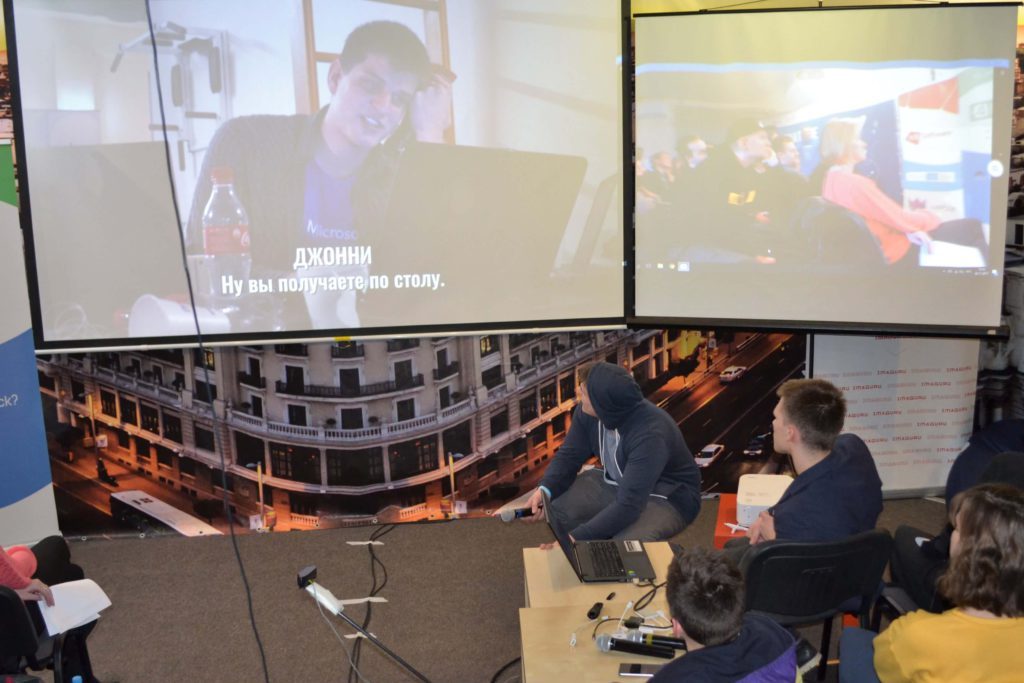 The ZAVOD team has created the most unusual and crazy hack that exploded the minds of the audience. Now, there’s no need for human participation when it comes to the scriptwriting for movies. Developers have filmed the blockbuster movie based on the script made by the neural network. It scored more than 80 000 views in just two days after the hackathon. Seems like after unfeeling robots defeat the human race during the revolt of machines they won’t left without TV series.

The Most FUN-tastic Mobile Hack 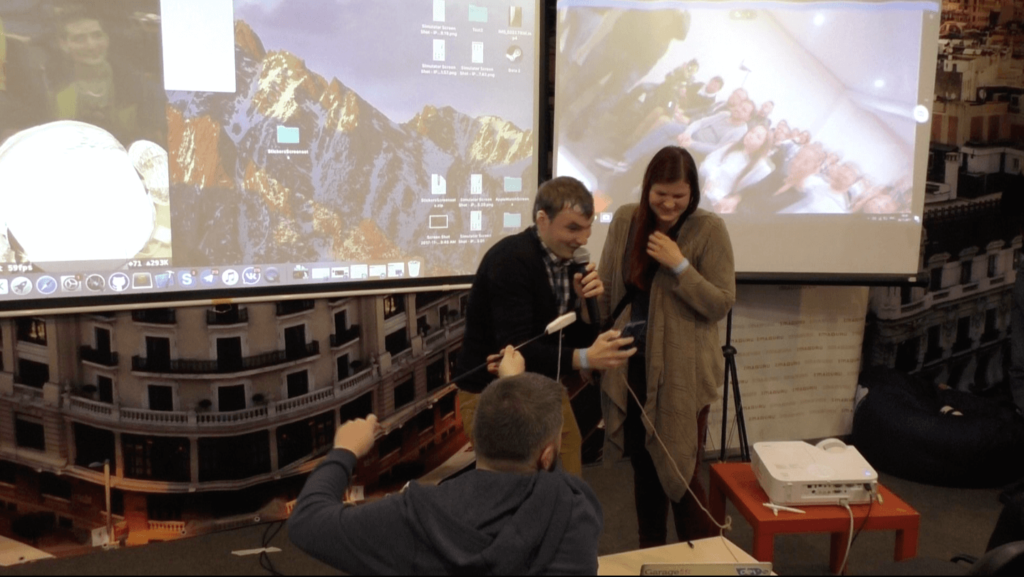 The team of brother and sister named ARPrikol has developed the augmented reality game in a fantasy setting. The goal is to protect the princess from the dragons. But instead of a shining sword, you should use your smartphone. Dragons appear on the screen and try to harm the princess. The only way to save her is throwing magic balls at them. 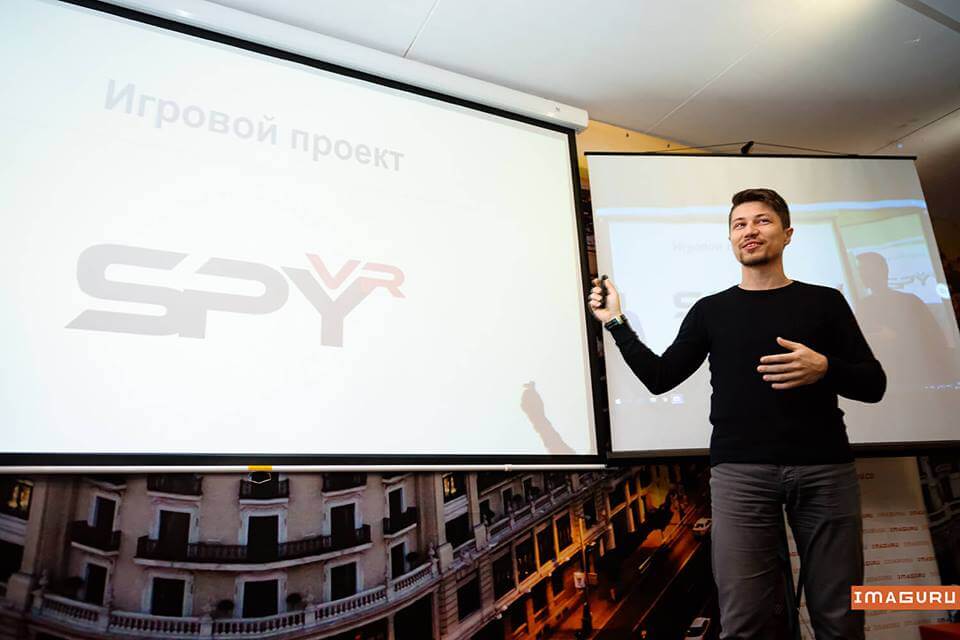 The Spy VR team has developed the game that implements the concept of the “Cube” movie. It’s the first VR game that can’t be played without the help of your friends. The player must solve puzzles using VR glasses while his friends see the room on the monitor and can give necessary advice. The time limit is five minutes. After solving all puzzles, the player can leave the room which is counted as a victory.

The only way out lies within your own mind. 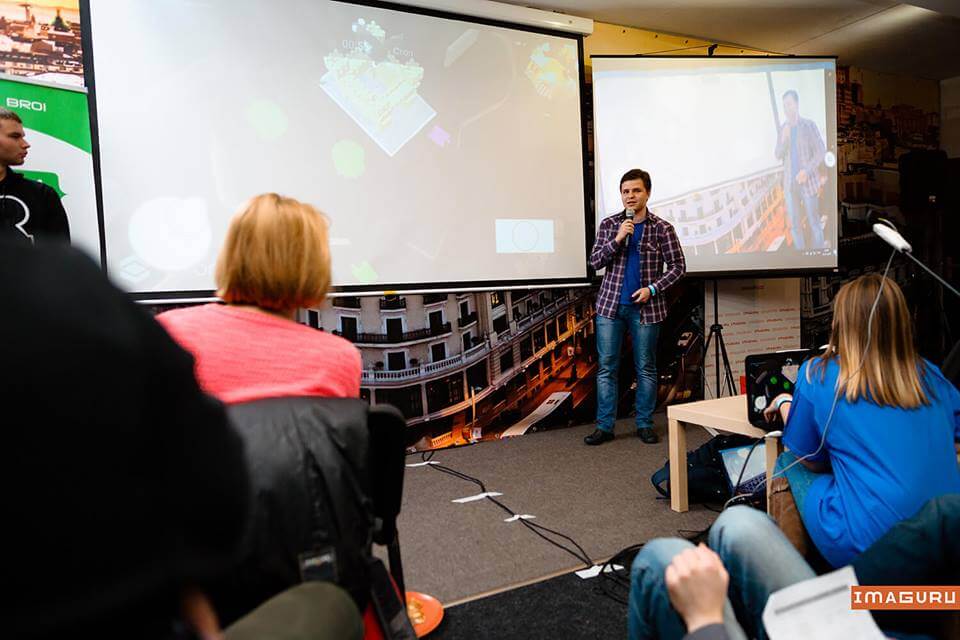 The Nuclear Samurais team has created a multiplayer AR tank shooter. You can play it anywhere you want. All that you need for creating a playground is a couple of smartphones. The app can scan real-life objects and add them to the game. They will become game elements that players can use for cover. Since every object lying on the floor can beсome a part of the game map, there’s no reason to rush with cleaning your apartments. Instead of that, you can use the moment and have some fun creating a unique map for the epic tank battle.

The Most Technological Hack. Harmless Boxing 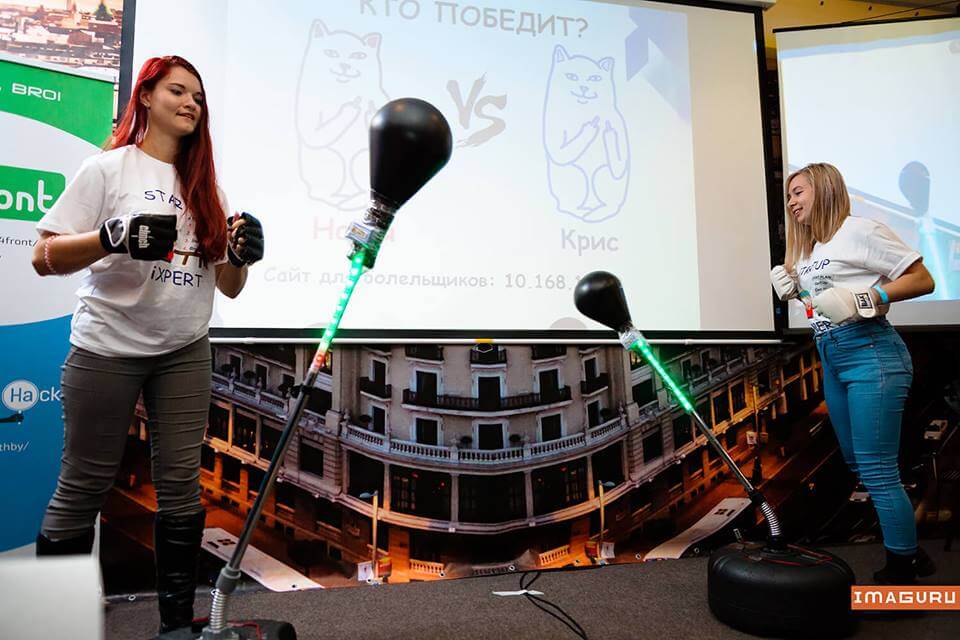 As it has been said before, this year’s hackathon widened its borders. The ELMICS team from Moscow (Zelenograd) brought to Minsk a pair of not-a-punching-bags. It’s a device that allows resolving conflict situations between two persons without any physical or moral harm. You can see how it looks at the photo above.

Each of not-a-punching-bags has a set of green LED’s on it. When you’re making a punch, one LED on your opponent’s side turns red. The one who faster gets more points will win.

The Most Technological Hack. Firefighter Drone 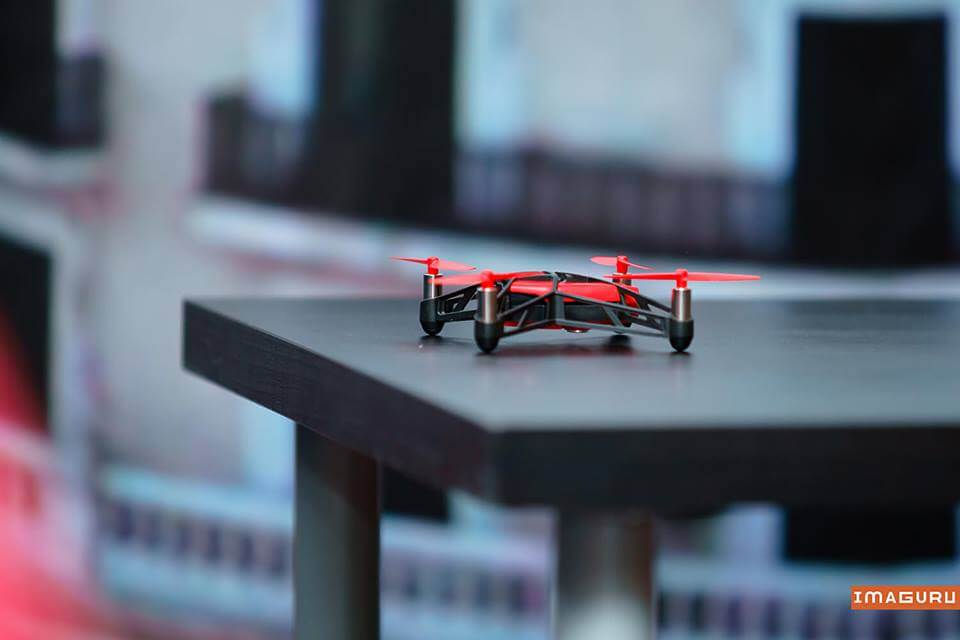 The Kalanchoe team has created an application for the firefighter drone. If there’s a fire inside the building, the Arduino based smoke detector can send a signal to a server. The server, in its turn, can wake up the drone which can use the built-in flame detector to find the place of ignition and drop the fire-fighting foam. Following the modern trends, developers used the blockchain technology for providing the possibility to pay for the firefighting services.

You can get more info on this GitHub and GOLOS.io pages. 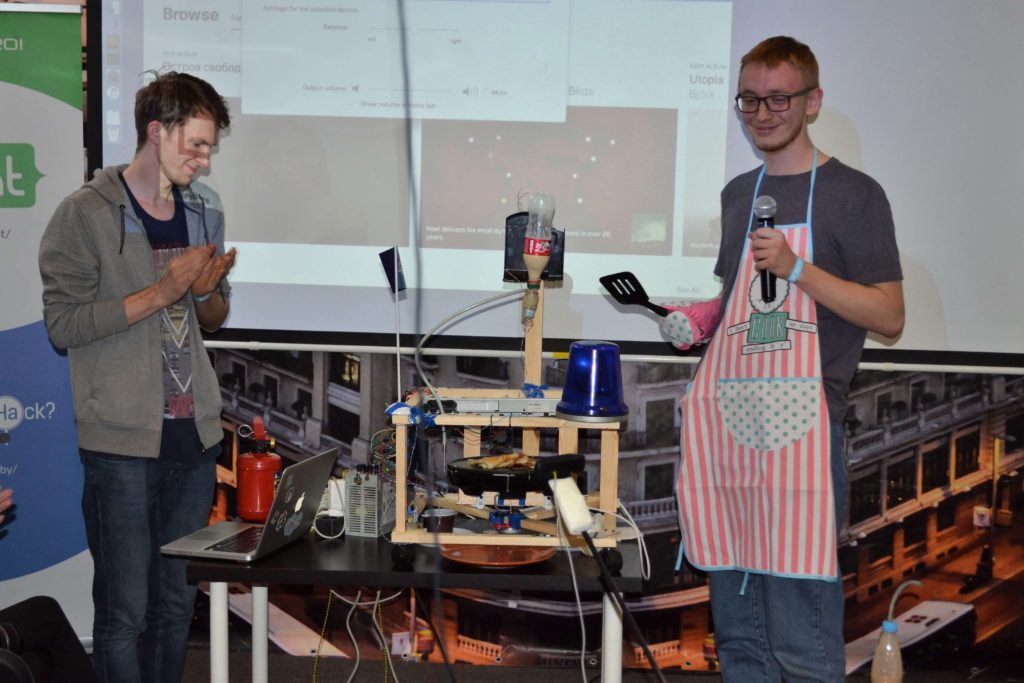 It is not just the third place of our hackathon but also the most ”delicious” hack. Using two 3D printers, the John Cena team has created the printer for pancakes and developed the application that controls it. You can choose any image to be “printed” on the surface of rotating pancake maker. You can check this YouTube page to see how everything works. Yummy!

Thanks to the Songo team, you can make any public person sing your favorite song. As a demonstration of their app, the team members made Donald Trump sing one of the Nirvana hits. The neural network built by developers can generate such kind of content automatically using videos available on the internet. There’s a possibility to generate a message to be voiced by any person of your choice. 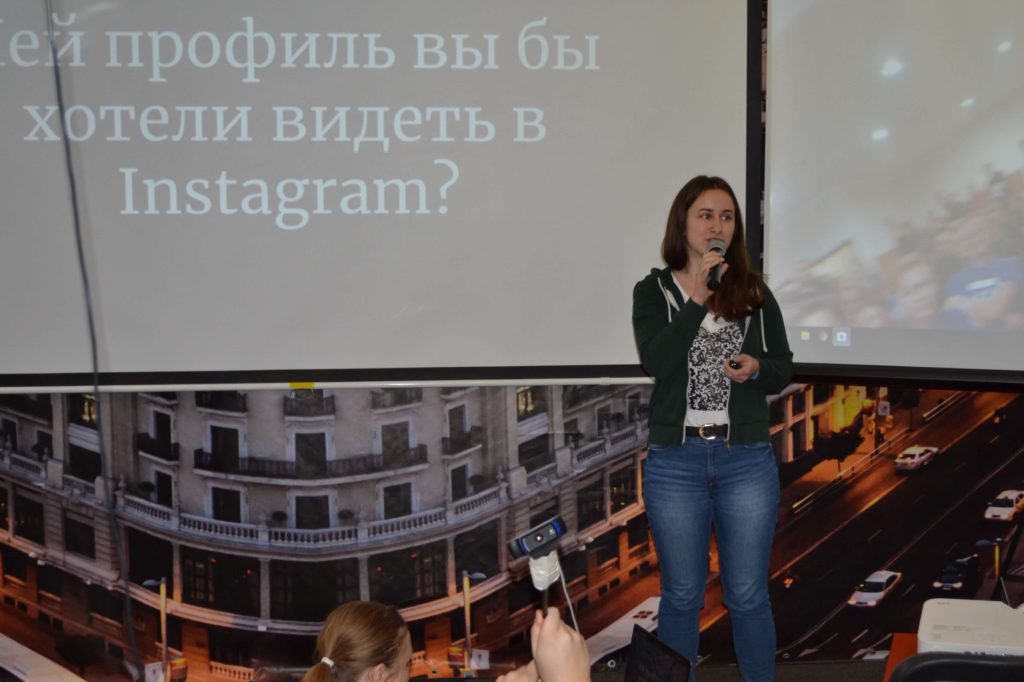 And the first prize goes to…

The FL team has created the Ifonlygram web application. It can generate an Instagram-like online profile for any person of your choice. Any man, woman, or fictional character can become a fitness, fashion, or beauty blogger. Ifonlygram will add photos to the profile along with catchy inscriptions and hashtags. Have you ever dreamed of becoming a subscriber of Marilyn Monroe or Winnie the Pooh? Now it’s possible.

We are grateful to each team for their participation, zeal, creative ideas, and positiveness they brought to our hackathon. What The Hack 3.0 was one of the craziest and brightest events of the year. We would like to thank the organizers, partners, and sponsors of WTH 3.0. We’re not saying goodbye, and we’ll be happy to meet new friends on the next hackathon.