What the Hack 2014: TouchPaper, eBuben and Other Magic (Part 1) - XB Software

What the Hack? 2014 – a true hackathon from developers for developers, the first of its kind, was held within the EU Code Week in Minsk, Belarus, on October, 17-19 2014. For the first time in the history of this European movement of coders our Belarusian hackathon was on the list. That was due to the efforts of the sponsoring XB Software company and Imaguru that hosted the event. 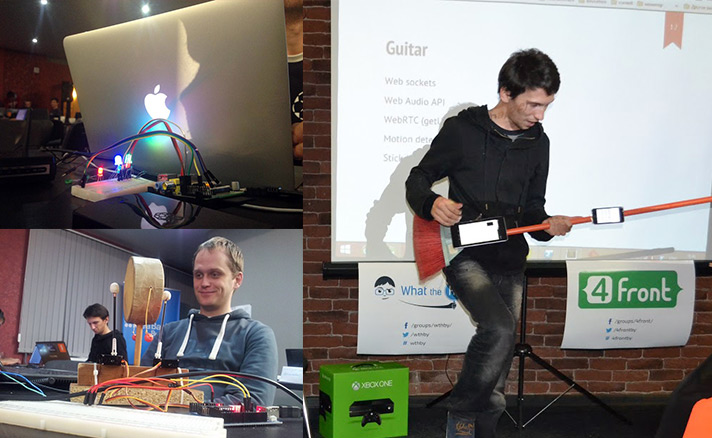 Unlike other similar events, What The Hack didn’t aim at finding solutions for any business problems. The primary goal of the hackathon consisted in the possibility of self-developement as well as in promoting personal and business ideas. What the Hack? combined Hack4Fun, Hack4Prise, Hack4Networking, Hack4Ambitions and Hack4SelfDevelopment in one hackathon. That’s why the selected jury weren’t conservative and strict guys. It consisted of cheerful developers who tend to use cutting-edge technologies and welcome non-trivial approaches and unusual solutions.

The event took place at the Imaguru Startup Hub famous among Belarusian IT developers. There were about 20 working zones created on the two floors of the Imaguru building. The participants of the hackathon worked over their projects day and night. They had only 44 hours to create a prototype and/or a demo that should impress both the audience and the jury. Here’s a short slideshow about the event:

As fas as What the Hack? wasn’t intended to solve any business or social problems, the participants’ creativity was not limited to certain subjects or technologies.

The final saw 19 teams from Minsk and Grodno ready to present their ideas and projects. All the hacks were quite interesting and deserved attention.

Let’s start with the winners and the nominees for the main prize – XBOX ONE from XB Software company. Three teams were shortlisted – “ProdIsDown”, “Alert box” and “Bags Under Eyes”.

After a long discussion, the jury decided to award the main prize to Sergey Krivov and Evgeny Boltukho from the “NoName” team. They presented the project “AlertBox” – an alarm box equipped with LEDs that react to signals coming from the Internet. How it works: a mini-computer Raspberry PI is built into the box and the whole system is connected to the Internet via an Ethernet cable. Two services are set up inside: one communicates with the hardware and the other controls the UI. It’s possible to customize in a browser which event (a new email, a site isn’t available, a new tweet or a new photo in Instagram, etc.) will trigger this or that LED to switch on/off. They created API for third-party apps and developers, which allows integrating the LEDs functionality of the AlertBox into other services.

The team of Artyom Litvinov, Valentin Zavadsky and Yury Koleda were also nominated for the first prize. They presented a ready solution “ProdIsDown” – a web-service for emergency notification of developers about critical problems on the project through various channels (email, SMS, skype, Viber).

One more nominee was the team of Vladimir Dashukevich and Ivan Berdov “Bags Under Eyes”. They came up with a musical project “Orchestra v.2.0″. By using Web Audio API, Web Motion API and WebRTC they managed to create an entire orchestra that consisted of tablets and smartphones imitating different musical instruments (a trumpet, drums, a trombone, a tambourine, a guitar and an accordion).

Besides the main prize, there were 5 more nominations presented. So, the following winners were declared:

1. The most spectacular hack

The “TouchPaper” project was honored with such a title. It was created by the team of Dmitry Radyno and Egor Bukrab. To develop the project they used the magic of JavaScript, which allowed creating a touch surface with the help of glass and paper as well as a mobile phone, video capture from a phone camera, web-sockets and lots of algorithms of image recognition.
TouchPaper works in the following way: a white piece of paper with various forms painted on it is put on the glass. Then these forms are recognized with the help of a phone’s camera as clickable buttons. 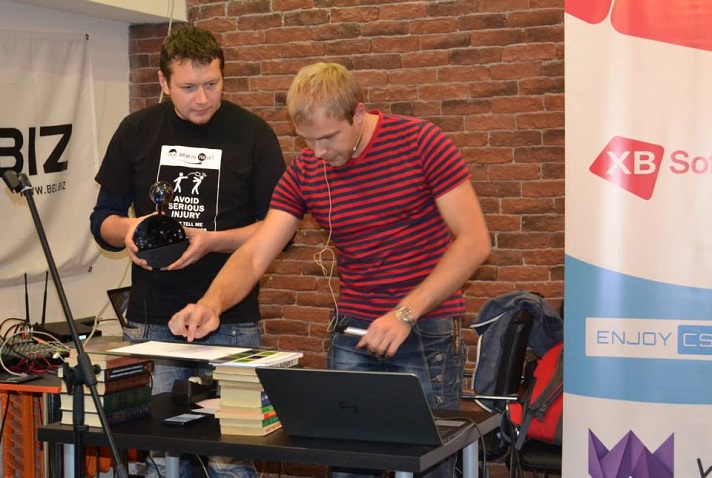 2. The most technological hack

The team of Vitaly Volosyuk, Viktoria Piliptsevich and Andrey Lapanik suggested to solve all problems with the help of a tambourine (in Russian it is called “buben”). “eBuben as a Service” lets a user imagine himself as a voodoo and bang the real tambourine that can be seen and heard via a web-cam online. The Arduino platform, two server drives, a piece of rubber and some other things were used for creating an electronic tambourine. The technologies used: C++, Python, HTML.

3. The most tangled hack

The most tangled hack for the completely male jury turned out to be an app for Android OS “Smart Wardrobe” by the cheerful team named “TotallyFun” (Tatyana Domanova, Daniil Pastukhov, Christina Burda, Anastasiya Mitskevich).
First of all, the “Smart Wardrobe” app was created to simplify the life of girls. It helps find and choose clothes depending on the weather and filter them by various categories. In future the app will allow exchanging messages with a friend in order no to be dressed alike.

An interesting dance training project “URSuperStar” for home usage was presented by Irina Levina and Liza Selivanova from the team called simply “Team”. 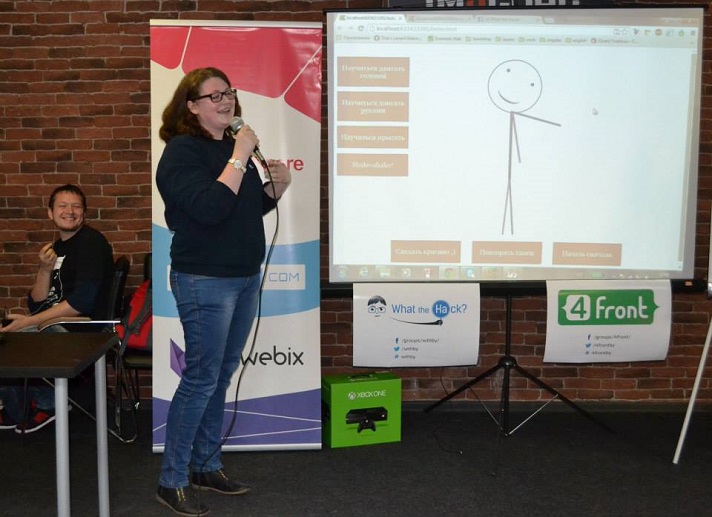 5. The most useless piece of code

The project ”Walkie Talkie” with its humming button was declared the most useless piece of code. It was created by the team “CocoaHeads” (Kiril Lashkevich, Alexander Andrashuk, Viktor Ilyukevich and Konstantin Salak). Walkie Talkie is a hissing gadget for iOS devices that is connected via bluetooth and wi-fi.

Prizes for good business ideas by Imaguru and Bel.Biz

The videos of projects presentations are available in Russian here.

See also What the Hack 2014: Social Net For Tourists, Pintoid and Other Hacks (Part 2)