One of the main tasks for the local government in every city or town is to build and maintain an attractive environment for citizens to spend time, shop, work, and socialize. The task of capturing and monitoring all the issues that an average citizen may face during the day-by-day activities is an uneasy task that may require significant human resources. Fortunately, thanks to modern technologies, there’s the possibility to remove the barriers between the taxpayers and municipal institutions.

Our web application development team was asked to build an online solution that will allow users to compose and send reports regarding particular issues to the municipal institutions and monitor the progress of solving raised problems. The app should decrease the amount of paperwork and enable a more efficient workflow by eliminating the number of duplicated requests received from the citizens. Also, the 311 integration should provide users with easy access to non-emergency municipal services.

Our developers have created a Progressive Web App (PWA) that works flawlessly on PCs and mobile devices. Android and iOS support allow users to send issue reports on-the-go without postponing it for later. While creating an issue report, the user can point to a particular location on the interactive map to help municipal workers respond faster. Alternatively, the location can be detected automatically using the mobile device’s geolocation feature.

If the user wants to report, say, graffiti or illegal signage, the app allows using the smartphone’s camera or attaching an already taken photo from the gallery. This feature may also help control the quality of provided municipal services. For example, after a particular problem is solved, the employee can attach a corresponding photo to the report available to all users. Any reported issue can be tracked via the mobile or desktop app. In case of any changes, the user will be informed via email or push notification.

Besides reporting problems and monitoring how well local governments can solve them, the app developed by our company provides some features for deeper involvement in community life. For example, users can receive recent news on local events and subscribe to the news channels that they find most informative. Also, push notifications will inform every citizen about important upcoming local events.

If a user wants to start a new group activity, the app will provide all the necessary functionality. For example, the application allows booking a basketball court for the local championship. Using a built-in calendar app, users can create a new event and send a corresponding notification to some friends from Facebook or create an announcement available to all city residents. The same feature may be used, for example, to inform the neighbors about a charity initiative to raise funds for those in need.

To create a neat and intuitive user interface, we used the Webix JavaScript library. For the back end part of our system, we used Node.js. 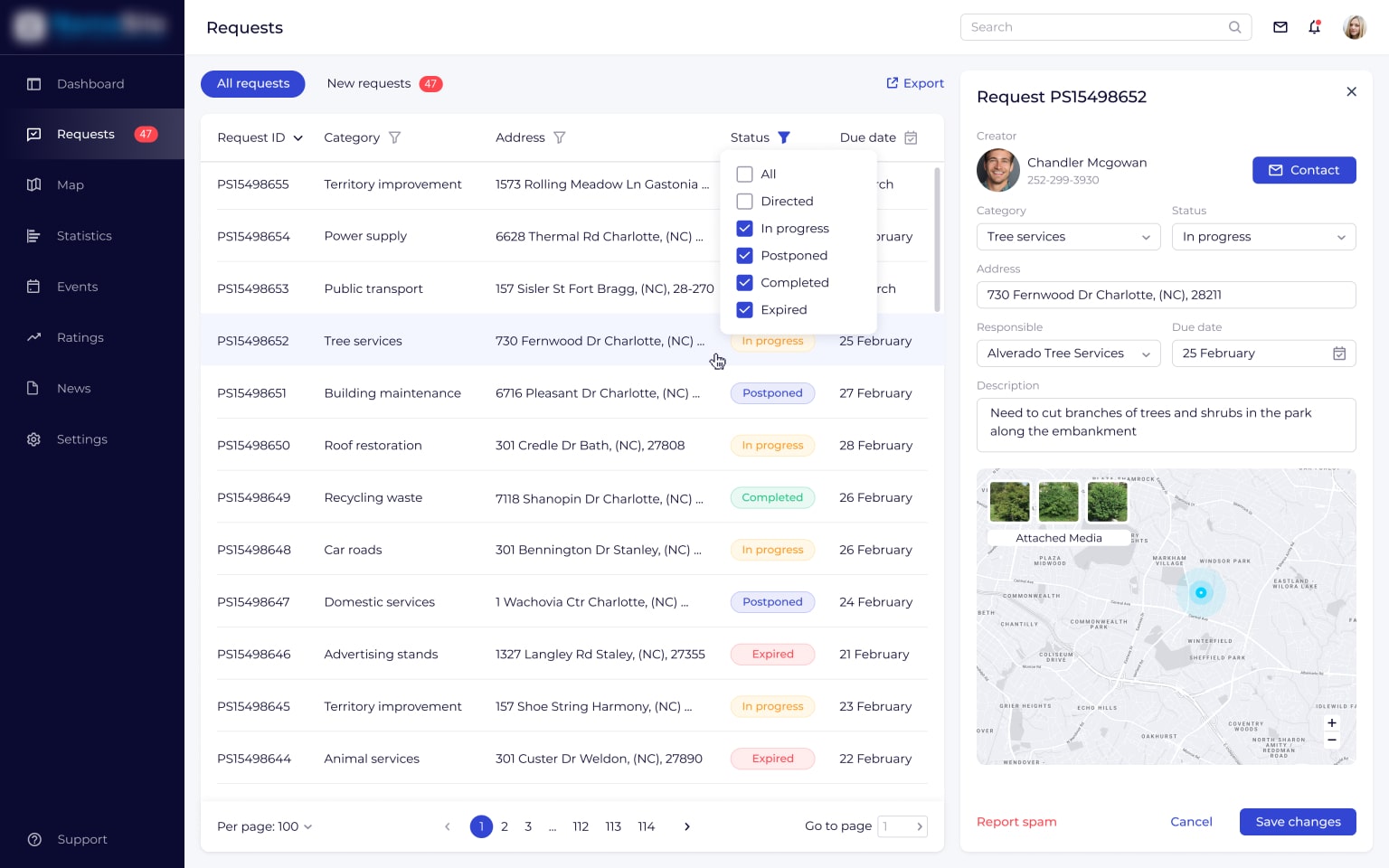 XB Software’s developers have created an easy-to-use online solution that allows significantly improving the efficiency of municipalities. The app allows users to report issues and monitor their solving with ease using their PCs or mobile devices. Besides, the app provides functionality for holding collective activities and charitable initiatives.

Among the main benefits of using this app, our client noted the following:

All cases
Human Resources Information System
Project Management Application Based on the Gantt Chart
Real Property Portal
All cases
This site uses technical cookies and allows the sending of 'third-party' cookies. By continuing to browse, you accept the use of cookies. For more information or to refuse consent to some or all cookies, see the dedicated section More information
I accept