The blockchain technology made some noise back in the days, but mostly all this attention was related to the boom of cryptocurrencies. Blockchain application development, however, has enough potential to force us to reconsider our views on many other things besides using fiat money alternatives. One of the blockchain applications that usually gets less attention than digital currencies is smart contracts. The way they change familiar business processes can be considered groundbreaking, which doesn’t allow us to ignore them any longer. That’s why today, we’ll consider the basic principles of smart contracts and the benefits they bring.

Making Contracts in the Web3 Era

The blockchain technology as a whole and smart contracts in particular are integral parts of so-called Web3. If you accidentally missed it, currently the Internet is going through the third global phase of development. Web1 was the age of static web content, and people were using it for reading what websites offered. Web2 was marked by increased interactivity and allowed users not only to consume the information but also create it with almost no limitations. Web3 that we’re witnessing today made a step forward and has become more decentralized. This state of the Internet, according to the Web3 paradigm, implies that data isn’t stored or owned on a centralized entity. Instead, web development is considered as a set of tools allowing to achieve a state where data can be shared among multiple entities and transaction security can be ensured by the algorithms and not by any centralized organization. 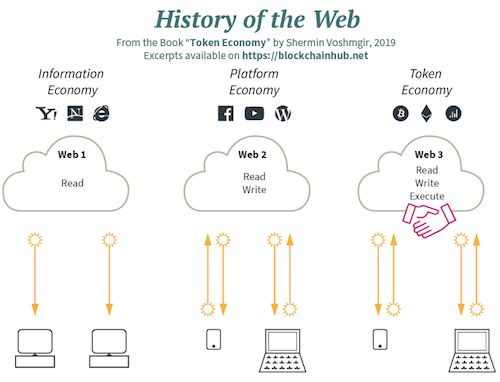 Smart contracts fully correspond to this description and are sometimes called Web3 contracts. Long story short, smart contracts are programs backed by the blockchain technology that automatically check if the current state of a transaction fits the set of predefined conditions. The trick here is to avoid the necessity of any middlemen presence. At some point, the development of web technologies allowed programmers to build a network of computers that run the smart contracts code, triggering some predefined actions if the transaction goes this or that way.

All participants are well aware of potential outcomes of a specific transaction, so none of them will become a surprise to anybody. They’ll just show that conditions specified in the smart contract have been fulfilled completely, not fulfilled at all, or fulfilled just partially. According to the results, the smart contract can, for example, release funds to one party, send notifications, issue a ticket, and so on. If everything went as planned, the transaction will be considered finalized and linked to the blockchain. Nobody except for the involved parties will see the result of such a transaction. You can write your own smart contracts, but if you want to concentrate only on business and don’t have enough time and resources to craft them on your own, you can rely on a custom software development company that provides such services.

How to Use Smart Contracts in Business

After we learned how smart contracts work, there’s another important question that requires an answer. Where can these contracts be applied? The simple answer is that you can use them in any scenario where you can define what rewards or penalties the system should impose in certain cases. Suppose you want to arrange with the contractor for the delivery of ten apples. The smart contract, in this case, must contain instructions on what transactions to perform in case if all cargo is delivered in full and on time. If some part of the cargo was lost or delivery conditions were not met, smart contracts will react accordingly. For example, if the temperature was too high during delivery or some apples were rotten on arrival, the smart contract can initiate a penalty.

Shipping freight can be an excellent field for applying smart contracts. If your business is related to the delivery of crates with perishable products or medicines over long distances, you must rely on somebody who’ll track storage conditions all the time. In case of violation of the temperature and humidity regime, you’ll have to start a dispute in order to find who’s responsible and identify ways to repair the damage. This requires time and, in most cases, some middle-men involvement. In cases of smart contracts, the system can automatically control as many data indicators as the safety of your cargo requires. Software development companies can easily build a system that supports IoT-devices and can collect actual data on temperature, moisture, and humidity. Along with such information as the number of crates, their weight, dates of loading and sending, this solution can significantly increase the overall transparency.

With non-compliance with the contract, there will be no need for your direct participation, since smart contracts can automatically send the forfeit to the unscrupulous contractor. The smart contract may have as many inputs as required. You can control fees attached to tolls or any other variable. If some predetermined conditions are not met, a smart contract can simply stop execution and suspend payments with no delays associated with costly litigation.

The insurance field is another example where increased transparency and automation provided by smart contracts may become handy. It’s not a secret that the number of fictional insurance claims remains pretty high from year to year. The possibility of excluding as many middle-men as possible in this case will help to decrease the likelihood of fraud. Smart contracts development can help to automate error checking, accurately determine the amount of insurance payments, and ensure the security of all transactions.

Smart contracts allow simplifying your digital identity management. You can store and control all the data related to your reputation and digital assets within the blockchain network and decide what portions of such data will be disclosed to a counterparty. Such functionality provides enterprises with the opportunity to know their customers and vice versa.

Any organization that works with tons of data records, especially distributed among multiple departments, can benefit from smart contract development. Say you work in a financial organization and have to spend a significant amount of time to confirm countless transactions and ensure that every employee has access to accurate and timely information. Using smart contracts can enable access to consistent financial data across organizations and reduce auditing costs.

Dozens of post-trade operations usually made manually by each counterparty for verifying trades can postpone the completion of transactions. Smart contracts allow avoiding these duplicative processes by utilizing a combination of contract conditions that run automatically and help to optimize post-trade processing of over-the-counter derivatives.

Read also How to Build a Cryptocurrency Exchange Platform in 2022

If there’s room for automation in business, you can be sure that smart contract development will fill this niche eventually. For example, the parties involved in a mortgage can be automatically connected with each other by a smart contract. Blockchain can guarantee a low error-prone, safe, and minimal friction connection process. Thanks to the automation, the payments and release of lien will be processed instantly after the loan is paid.

It may not be so easy to adopt a new technology, especially when it has all chances to change the usual course of things, even if these changes are for the best. In such a case, it’s important to consider all the benefits you can get before moving a step towards something new.

With smart contracts, thanks to the decentralized execution of transactions, you can eliminate the human factor to a very large extent. This aspect has different effects. First, the risk of human error is quite low. Especially if you cooperate with a reliable smart contracts development team. Second, the fewer people are involved, the lower the risks of fraud will be. Since the number of the intermediaries ranges from zero to several, smart contracts help to reduce reliance on third-parties that should provide trust between the parties to the contract. Another consequence of less human intervention is cost reduction.

Besides transforming the existing business organizations, smart contract development helps to create completely new business models. Using them, you can provide your clients with automated access to storage units, vehicles, or any other thing that has a physical lock on it. A client can use a smartphone to make a payment and unlock a house that he wants to rent, for example. Auto insurance can reach a qualitatively new level as well. If a vehicle is equipped with an IoT-device, it can allow executing claims shortly after an accident based on the recorded driver reports, vehicle, and accident report history.

Since there’s no need for a human being to interpret what’s written in a smart contract, all preset actions will be executed once specific conditions are met. You won’t have to worry about how much time it’ll take to complete transactions, since they’ll be executed immediately. Last but not least, thanks to the current state of blockchain technology development, there is no doubt that all transaction records are encrypted and extremely hard to hack.

If you’re not sure if smart contracts are for you, you can ask yourself a simple question: “Do I use contracts regularly?” If the answer is “Yes,” then you definitely should try them in practice. Smart contracts reduce the likelihood of manipulation and fraud, reduce delays associated with litigation, help get rid of auditing costs, and so on. The blockchain application development services provided by software development companies will allow you to plunge into the world of smart contacts as soon as possible.

If you’re looking for a reliable smart contract development team, don’t hesitate to contact us.

From Adaptive AI to New Green Initiatives. What Tech Trends to Watch in 2023 By Sergey Laptick
From Digital Art Trading to Supply Chain Management. How NFT Can Improve Your Business By Sergey Laptick
Simple Guide to Building Your Own Cryptocurrency Exchange or What You Should Pay Attention To By Julia Mitsiakina
Meet New Trends for Logistics Management Software Development in 2022 By Julia Mitsiakina
Technologies in Supply Chain Management: Trends, Costs, and Predictions By Yana Sarycheva
Smart Contracts: Industry Examples and Use Cases for Business By Aleksandra Dikusar
How to Build Complex Web Widgets By Alena Vershilo
Common Knowledge: When It Is Impossible to Avoid Using Responsive Web Design Techniques By Julia Mitsiakina
What is a Tech Stack and How to Choose the Right One for Web Application Development [2023 Update] By Sergey Laptick
Applying Concepts From the Business World to Web Development. How Contract Driven Development Works By Ujin Kosy
Get Updates from XB Software team