It’s pretty hard to find a business owner who doesn’t want to grow and prosper. Finding new customers and entering new markets are irreplaceable parts of success that, however, can bring some problems you’ll have to solve. As your company grows, you have to hire more employees, educate them about the specifics of your business, and track their productivity in order to assess their overall impact on your company. Everything is more or less clear with the hiring of new employees. But if your business relies on IoT, growth issues may not be as apparent in resolving.

Scalability, or the ability of a system to remain operational during the growing process, is a pretty severe aspect for any company that relies on complex software systems or hardware solutions. Adding more devices will undoubtedly lead to the increase of incoming information. However, if you ignore the scalability of your system in advance, you risk facing increased maintenance costs and latency problems that will cost you dearly. In this article, we’ll share some tips that will help you to avoid unwanted fuss caused by IoT scalability.

The most obvious reason that is typical for any case, not only for IoT, is the fact that system management complexity grows as you add new elements into it. The IoT industry develops constantly, and each year we witness more reliable systems that developers follow the latest data protection standards. However, the inability of some IoT systems developers to take necessary actions to guarantee issues-free scalability in the future sometimes takes place.

For example, uncertainty, if the overall system will be compatible with new IoT devices that’ll appear on the market, plays a particular role. According to Statista, the number of connected IoT devices will reach 75.44 billion by 2025: 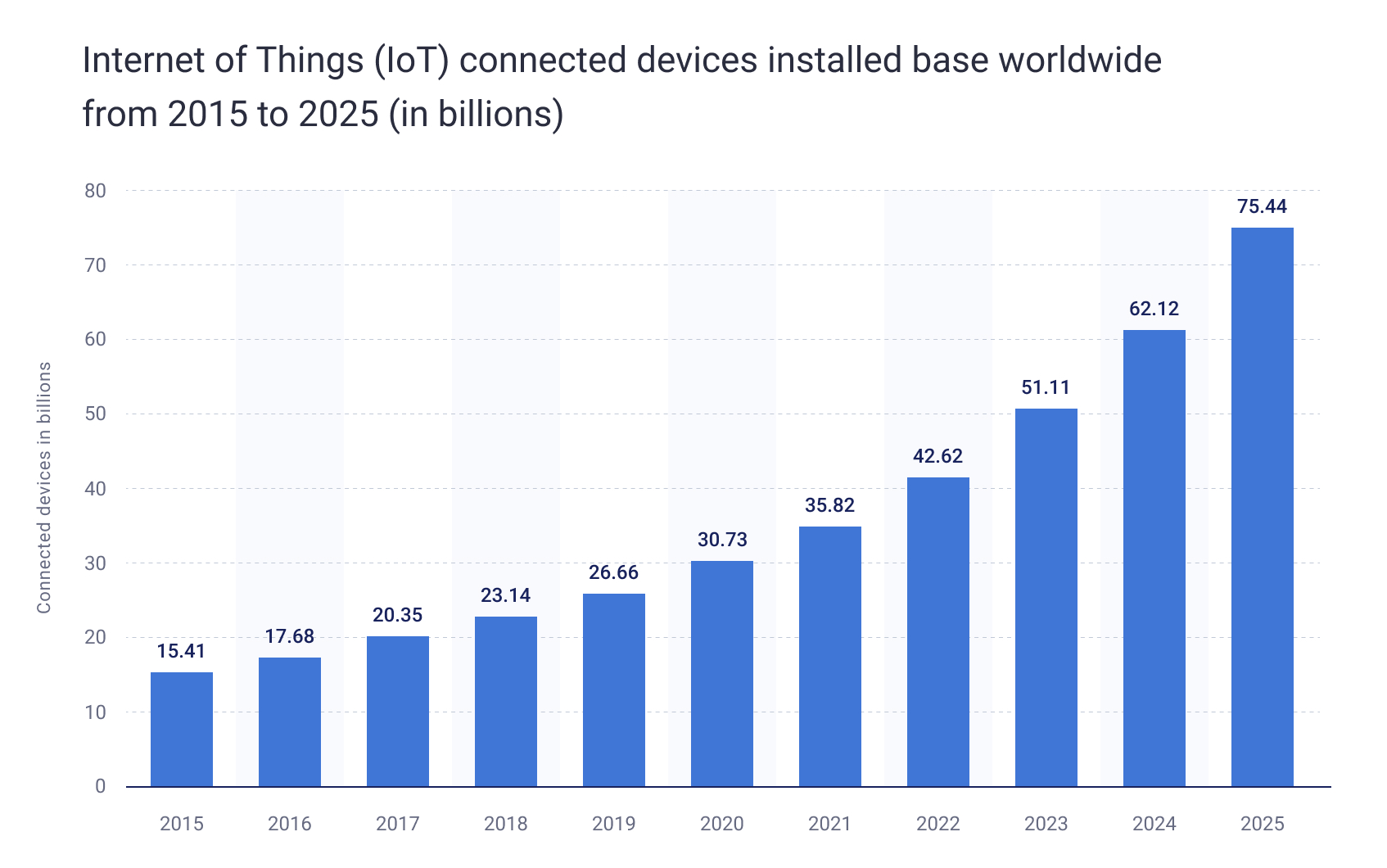 Considering the pace of development in the industry, you can imagine how the way a specific type of IoT device receives and sends data can change in, say, five years. It may lead to some inconveniences from the scalability point of view when adding new elements into a seemingly trouble-free system designed years ago. In addition, poor planning during the start of an IoT project can lead to ignoring a set of technical and organizational aspects leading to unexpected scalability issues in the future.

Read also: How IoT Simplifies Our Life and in Which Spheres It is Used

Budgetary constraints and the unwillingness of IoT developers to invest in the system to decrease the probability of appearing scalability problems in the future is also an aspect that may have a colossal impact. Now, let’s consider some tips that may become useful for any company that one day will desire to benefit by entering the fascinating and promising world of IoT.

Don’t Try to Bite Off More Than You Can Chew

Believe it or not, in some cases, it’s better to limit your growth. For example, rushing with adopting as many IoT devices as you can, may not be as good an idea as it seems. Instead, you can start with a few ones and add more after you feel comfortable handling the data flow they provide. In such a case, you won’t have to change the way you manage your business right away and better prepare yourself for possible scalability problems that may appear in the future.

Suppose you cooperate with a reliable and experienced company providing custom software development services. In that case, you can design a scalable system allowing you to add multiple devices at a time when you are sure that this is the right moment for it. Also, you can determine which metrics to track to understand better how IoT adoption affects your business and provide developers with actual data if there is the need to correct anything.

Determine What Goals IoT Will Help You Achieve

When you decide to start a new IoT project, you have to clearly understand what specific business goals your future system must help you achieve. As a result, you’ll get a clear picture of how the growth of your business may or may not cause IoT scalability problems. Say, industrial IoT may become pretty helpful if you want to benefit from the predictive maintenance possibility it can provide.

Your software system can automatically process data received from IoT sensors installed on your equipment to analyze its current state and notify you about the need to fix the appeared malfunctions. Thus, your maintenance team will be able to react as quickly as possible to prevent unwanted equipment downtime. If you decide to increase the amount of equipment, you’ll know how many new IoT sensors you’ll need and how the amount of data to process will increase. On the other hand, blindly collecting and processing data trying to find insights to optimize your operations won’t guarantee good results in terms of scalability.

Read Also: What is the IIoT? Everything you need to know about the Industrial Internet of Things

Consider IoT Devices as One of Your Most Valuable Assets

To ensure smooth IoT scalability, you should not treat such devices as a small addition to your business but as an essential asset that you must manage accordingly. When you decide that it’s time to expand your IoT network so it’ll better fit your increased needs, you’ll have to process tons of info describing how this complex construct works. A team of IoT specialists will have to explore your IoT network, add new nodes to it and ensure they send data to the right place. Legacy technologies in such a case may become a severe scalability problem since they can use protocols obsolete by the time you decide it’s time for an IoT upgrade. In addition, it can be problematic to organize an unimpeded data flow in this case.

Since you risk finding yourself with a bunch of useless equipment in your possession at some point, it can be an excellent decision to develop a system to help better control your IoT assets. When you decide to deploy an IoT system, you should consider how long approximately it will take for the used network technology to become obsolete and compare this information with the IoT devices’ expected life span. If you decide to invest in IoT, make sure that your plan won’t fail due to a lack of long-term support for the equipment you’re going to use.

Remember That It’s All About Data

You better be prepared that your IoT network will generate vast amounts of data, and this data must be stored somewhere if you do not want to lose the benefits it provides. You might not want to collect everything that the network of IoT devices will send to your data storage since not all of this information is useful to you. However, after increasing the number of IoT devices, a massive influx of new data can become a pretty serious scalability problem. Therefore, you must ensure you have a distributed database that can scale following your growing IoT appetites.

There’s No Such Thing As Too Much Testing

The last tip will not only help you to avoid IoT scalability problems but will also become good advice for all occasions. Test everything until you’re sure that the system works properly, and then test again. Regular testing of your IoT system is good in itself, but testing during the scaling process is a must. Check how the system responds to new IoT devices added, record how the latency changes, inspect what new data is sent and received, and test how a system will behave in case of some unpredicted occasions even if the probability of their occurrence is minimal.

The possibilities that IoT adoption provides also bring some challenges that you cannot underestimate. Since each of such devices generates valuable information on which your business success depends, scalability problems that may appear must be addressed during the planning phase. Any system becomes more complex with each new element. In the case of IoT, the growth of your business can be accompanied by the addition of tens, hundreds, or even thousands of new details. As you can imagine, choosing the wrong approach to the IoT system design can make future growth very difficult to cope with. Therefore, to avoid scalability issues, make sure that you cooperate with a partner with extensive IoT development experience.

If you decide to adopt an IoT system and want to discuss your project, don’t hesitate to contact us.